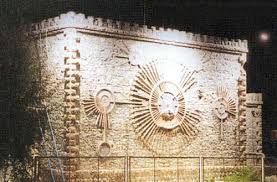 A "NICE BRIDGE" TO THE PERFECT ECUMENISM

"Get up, India, and conquer the world (of education) with your spirituality" (Indian Guru Vivekananda, Chicago 1893)

Seraphim Rose in his book "Orthodoxy and the Religion of the Future" reveals to us many "ideas" but "good religious practices" of Hinduism and Buddhism (1893) that influenced the high society of America but mainly the philosophers of Harvard who were very impressed by them! Western Christian intellectuals were so influenced by a mere human being, the Hindu monk Swami Vibekananda, that today, 126 years later, the Gurus (psychologists, philosophers, theologians) and the ideas of the Vedanta circulated everywhere in the West, from Chicago to Ptolemaida and, of course, throughout our Greece.

By way of example, I quote here a dominant-central idea of ​​the human being of the Vedanta: "Because of its essential divinity, man has in him infinite possibilities and the ability to remove the veil that covers the face of his divine nature, through a persistent effort of prayer, meditation, denial of the mundane and selfless service "[1]. Just like Buddhist Zen, Hindu Yoga does nothing more than "appeal to the subtle pride - so widespread today - of those who think they can save themselves, and thus have no need no Saviour outside themselves” (fr. Seraphim Rose; p. 94) [2].

"LOVE WITHOUT TRUTH IS A FRAUD" (fr. Augustinos Kantiotis)
Unfortunately, these ideas are nowadays freely circulated even in our school units by our (atheist) psychologists, due to our indifferent teachers who one morning forgot that they are Educators and because of the naive Parents and Guardians. Thus, many "good practices" of meditation stemming from Hinduism and Buddhism are taught today (supposedly to deal with anxiety and stress) within the Greek school with the consent of the Association of Teachers, with the Parents’ and Guardians’ ignorance, who no one ever counts - neither the state nor our alienated teachers (kindergarten teachers, educators) - thus rendering useless the greater shield of our own protection…
What today's high school students of 12 to 15 years old are hearing from psychologists is "the widespread modern views that consider meditation as a form of relaxation, liberation of stress, a situation where we "envision” pleasant scenes of idyllic landscapes, listening to relaxing music etc.» [3]!
But in reality, as they advertise themselves (i.e. in other web sites): "But in reality, we are dealing with a deeply mystical process because we gain the awareness that we are more than our common everyday self ... The meditator enters a state of increased alertness, focused attention and inner silence. The next step after physical relaxation and before focusing of the mind is to relax the mind. The mind relaxes by gently turning from the "vortex" of negative or stressful thoughts into the conscious creation of thoughts about our spiritual identity and nature: Thoughts such as "I am a serene spiritual being" or questions that arise with self-interest such as "who am I really? what am I? am I only what my natural eyes see? "," what is serenity?" can bring the meditator from the thought stage to the inner experience of each thought. The inner experience of virtues such as serenity could be said to be synonymous with positive experiences which in turn upgrades a person's character." [3]
Closing, I copy a few words from Fr. Seraphim that I believe will serve to anyone who wants to speak to our baptized children about the hopeful resurrected truth of our Lord Jesus Christ. The man of God writes: “Vivekananda’s message of Vedanta is simple enough. It looks like more than it is because of its trappings: some dazzling Sanskrit jargon, and a very intricate philosophical structure. The message is essentially this: All religions are true, but Vedanta is the ultimate truth. Differences are only a matter of "levels of truth". In Vivekananda’s words: "Man is not travelling from error to truth, but climbing up from truth to truth, from truth that is lower to truth that is higher. The matter of today is the spirit of the future. The worm of today - the God of tomorrow." The Vedanta rests on this: that man is God. So it is for man to work out his own salvation. Vivekananda put it this way: "Who can help the Infinite? Even the hand that comes to you through the darkness will have to be your own." Vivekananda was canny enough to know that the Vedanta would be too much for Christians to follow, right off the bat. But "levels of truth" provided a nice bridge to perfect ecumenism - there was no conflict because everyone is right. In the Swami's words: "If one religion be true, then all the others be true. Thus, the Hindu faith is yours as much as mine. We Hindus do not merely tolerate, we unite ourselves with every religion, praying in the mosque of Mohammedan, worshiping before the fire of the Zoroastrian, and kneeling to the cross of the Christian. We know that all religions alike, from the lowest fetishism to the highest absolutism, are but so many attempts of the human soul to grasp and realize the Infinite. So we gather all these flowers and, binding them together with the cords of love, make them a wonderful bouquet of worship." (Pp. 48-49) [2].

My beloved, in the end, is meditation at school a "good" affair or an extremely deceitful practice of converting our youths to the so-called "final religion" of the Ecumenists? Finally, the words of the former Minister of Education Fili who said that our young people should move freely from one religious temple to another, how friendly are they to what we heard from Swami Vivekananda? And what about the supposed books of the course of Religion that the children of Greeks are taught? Isn't it "Vedanta", that is, THE FINAL FALLACY (OF ECUMENISM)?

P.S.
By Archim. Seraphim Rose:
"Still, all religions were only steps to the ultimate religion, which was the Advaita Vedanta. He had a special contempt for Christianity, which at best was a “low truth” - a dualistic truth. In private conversation he said that only a coward would turn the other cheek. But whatever he said about other religions he always returned to the necessity of Advaita Vedanta. "Art, science and religion," he said, "are but three different ways of expressing a single truth. But in order to understand this we must have the theory of Advaita."
The appeal of today's youth is unmistakable. Vedanta declares the perfect freedom of every soul to be itself ... religion is "doing your own thing" .... (p. 49) [2].